Many thanks to a friend of Balintore for sending me this newspaper article from the 12th August 1992. It gives a very clear snapshot of the situation of the castle at that time, having been purchased by a Mr. R. Kelbie sight unseen and immediately put back on the market again when Mr. Kelbie realised his folly. :-)  You can click on the scan of the article below to read the text. However, I have digitised and appended the text of the article to this blog entry as my digital legacy to the world. :-) 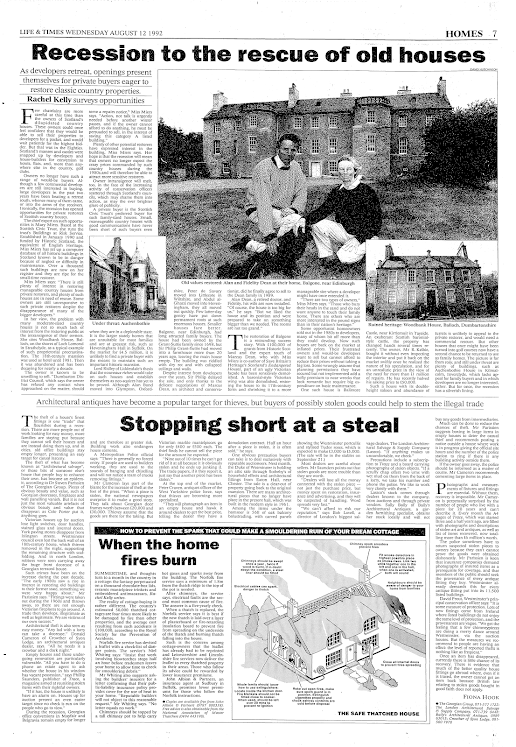 The name “Kelbie” is new to me, so this is another link in the chain of ownership that I am delighted to find out about.  I knew it had gone through the hands of some developers fairly rapidly, but not that rapidly!

I would put the £1m estimated restoration cost in 1992 to be an underestimate, and later restoration estimates that I have heard have been considerably higher. I love the comment in the article that Balintore Castle has too many turrets for a private owner to take on. :-)

The Zeitgeist described in the article is still with us. The days of big developers reliably and readily taking on historic buildings is no longer with us, so there is more scope for private developers. The nouveau riche lack the patience for longer restorations. So this still leaves larger buildings, such as Balintore, to fall between two stools. And it was precisely this tragedy that braced me to take on the building.

Mary Miers who supplies most of the quotes in the article is directly responsible for me first finding out about Balintore, as it features in the Scottish “Buildings at Risk” register that she founded. It is ironic that she implores in 1992 that the threat of a compulsory purchase is used to save a building in Dunbartonshire, yet it took until 2007 for Balintore to be the first enactment of this law. With the many TV makeover shows over the last 10 years, especially "Escape to the Château", restoring historic properties has never been more fashionable. However, council resources to save problematic buildings in this country have been cut way back with many now lacking a dedicated conservation officer. We are in a worse position than 1992, and I don't think the compulsory purchase of Balintore could happen today.

Recession to the rescue of old houses

Few chatelains are more careful at this time than the owners of Scotland's dilapidated country houses. These owners could once feel confident that they would be able to sell their properties to developers for a packet, and would wait patiently for the highest bidder. But that was in the Eighties. Scotland's manses and castles were snapped up by developers and house-builders for conversion to hotels, flats, and, more than anywhere else in the country, golf clubs.

Owners no longer have such a range of would-be buyers. Although a few commercial developers are still interested in buying, large developers in the past two years have been beating a retreat south, whence many of them came, or into the arms of the receivers. Ironically, the recession has opened opportunities for private restorers of Scottish country houses.

The chief expert on such opportunities is Mary Miers. Based at the Scottish Civic Trust, she runs the trust's Buildings at Risk Service. Established in January 1990 and funded by Historic Scotland, the equivalent of English Heritage, Miss Miers has set up a computer database of all historic buildings in Scotland known to be in danger because of neglect or difficulty in maintenance. Over a thousand such buildings are now on her register and they are ripe for the small-time restorer.

Miss Miers says: “There is still plenty of interest in restoring manageable country houses from private restorers, and plenty of such houses are in need of rescue. Some owners are still unresponsive to such private restorers despite the disappearance of many of the bigger developers.”

In her view, the problem with many moderate-sized country houses is not so much lack of interest from the restoring public as the intransigence of their owners. She cites Woodbank House, Balloch, on the shores of Loch Lomond in Strathclyde, as a typical example of such proprietorial procrastination. The 18th-century mansion was used as an hotel until 1981. Then it was abandoned and has been decaying for nearly a decade.

The owner is known to be unwilling to sell. “Dumbarton District Council, which says the owner has refused any contact when approached on the matter, should serve a repairs notice," Miss Miers says. “Action, not talk is urgently needed before another winter passes, and if the owner cannot afford to do anything, he must be persuaded to sell, in the interest of saving this category A listed building."

Plenty of other potential restorers have expressed interest in the building, Miss Miers says. Her hope is that the recession will mean that owners no longer expect the crazy prices commanded by such country houses during the 1980s, and will therefore be able to attract more sensitive restorers.

Owner intransigence will melt, too, in the face of the increasing activity of conservation officers scattered through Scotland's councils, which may shame them into action, as may the ever brighter glare of publicity.

A private buyer is the Scottish Civic Trust's preferred buyer for such family-sized houses. Small, manageable country houses with good communications have never been short of such buyers even when they are in a deplorable state. It is the larger stately homes that are unsuitable for most families and are at greatest risk, such as Heveningham Hall in Suffolk. On the market for £4.5 million, it is unlikely to find a private buyer with the means to maintain such an important historic mansion.

Lord Ridley of Liddesdale's thesis that the nouveaux riches would take on such houses and establish themselves as neo-squires has yet to be proved. Although Alan Bond moved into Glympton, Oxfordshire, Peter de Savary moved into Littlecote in Wiltshire, and Abdul al-Ghazzi moved into Heveningham, they all moved out quickly. Few latter-day gentry have put down permanent roots at such enormous houses. Smaller houses fare better. Balgone, near Edinburgh, had long attracted family buyers. The house had been owned by the Grant-Suttie family since 1698, but Sir Philip Grant-Suttie had moved into a farmhouse more than 20 years ago, leaving the main house empty. The building was riddled with dry rot and with collapsed ceilings and walls.

Despite interest from developers over the years, Sir Philip delayed the sale, and only thanks to the delicate negotiations of Marcus Dean, an architect and conservationist, did he finally agree to sell to the Dean family in 1989.

Alan Dean, a retired doctor, and Fidelity, his wife are now installed. "Of course, the house is too big for us," he says. “But we liked the house and its position and were prepared to take on something bigger than we needed. The rooms are not too grand."

The restoration of Balgone is a resounding success story. With £100,000 of grants from Historic Scotland and the expert touch of Marcus Dean, who with Miss Miers is co-author of Save Britain's Heritage's Scotland's Endangered Houses, part of an ugly Victorian façade has been sensitively demolished. A baronial-style Victorian wing was also demolished, restoring the house to its 17th-century form and shrinking it to a more manageable size where a developer might have once extended it.

“There are two types of owners," Miss Miers says. “Those who bury their heads in the sand and do not want anyone to touch their family home. There are others who are more interested in the pound signs than in their nation's heritage."

Some opportunist homeowners sold out in the 1980s to developers, many of whom bit off more than they could develop. Now such houses are back on the market at inflated prices. Their frustrated owners and would-be developers want to sell but cannot afford to reduce their prices without taking a big loss. Some wrongly assume that planning permissions they have secured but not implemented add a hefty premium to near wrecks that look romantic but require big expenditure on basic maintenance.

One such house is Balintore Castle, near Kirriemuir in Tayside. An exuberant Scottish baronial-style castle, the property has changed hands several times recently. The owner, Mr R. Kelbie, bought it without even inspecting the interior and put it back on the market swiftly once he realised the nature of his speculation, and for an unrealistic price in the view of the need for more than £l million of repairs. He has recently halved his asking price to £50,000.

Such a house with its double-height saloon and abundance of turrets is unlikely to appeal to the private restorer, and would need a commercial rescuer. But other houses that once might have been turned into golf courses now have a second chance to be returned to use as family homes. The picture is far from rosy, and still under threat are plenty of buildings, such as Auchenbothie House in Kilmalcolm, Inverclyde, which lacks appeal for family buyers and in which developers are no longer interested, either. But for once, the recession has a silverish lining.