I wrote a blog article last year on how to remove a watermark from a digital scan of a contemporaneous drawing of Balintore Castle. I needn't have bothered as a very thoughful Jeffrey Sanchez has recently supplied me with a copy of the image before it was watermarked. In a sense, it is the image which holds all aspirations for the building, as it was the one drawn up by the architect's practice for the client and captures the Victorian baronical dream of the Scottish Highlands. 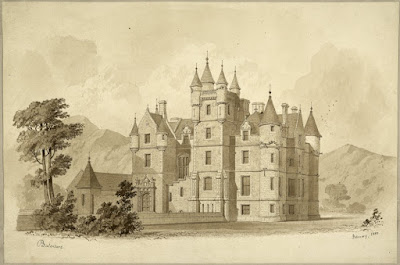 When my friends inside the Landmark Trust invited me to visit the Old Parsonage in Oxford this weekend, there was no prospect of me refusing. I was super keen to see how this British charitable organisation ( founded in 1965) presents historic buildings for holiday rentals. And of course, who can resist a dinner party with good company in a delightful setting?

With my car out of action, I set off in the dark to cycle the 9.4 miles from my house to Iffley where the soiree was taking place. Having not cycled this route in the dark for a number of years, I got lost and took the wrong turning three times. Due to the rough cross-country terrain, the gear mechanism on my bike broke half-way there. Holding my bike light over the gears and moving some bits of metal around, I got rid of the grinding noise but not the squeaking. Still, it was a good enough fix to continue my journey. The entrance to the normal cycle path I take along the banks of the Thames, was closed with many warning signs about there being no access to Oxford. However, at that stage I had only 10 minutes to get to the parsonage on time, so I continued regardless. Thankfully, the route to Iffley was still open and I crossed the Thames at the Iffley Locks for the first time in my life, despite cycling past the locks many times.

I got lost in Iffley. I knew the Old Parsonage was near the church and I cycled all the small lanes round the church but could not find the building. In desperation I looked back at the church, and could see a series of lit small arched upper floor windows in a row, of decided historic interest, somewhere to the right of the church tower.  I cycled to where I could get as close to this architectural feature as possible and found, much to my relief, a door marked "Old Parsonage" which led directly onto the pavement. I had cycled past here already, but in the dark I had missed the mediaeval stone detailings!


The Old Parsonage is, it has to be said, an absolute star of a building. If there is a square foot of wall space that is free from panelling, I did not manage to find it. :-) Like most panelling in really old buildings, this was likely recycled from an even older building as it had been bashed about somewhat to fit. The main block in which the holiday accommodation has been placed is around 1500, but some other parts of the building are considerably older. Another part of the building is the vicarage for the adjacent Norman church. And yes, there is a vicar living in the vicarage.

To my mind, the Tudor interior is the most quintisentially English with the large fireplaces, dark wood panelling and furniture giving the most homely vibe imaginable. The wooden floors with the patina of age, were raked at a variety of improbable angles and the floorboards creaked exactly as they should in an old historic building. I needed no convincing: the generous room sizes, yet with an intimate feel; the comfortable and well appointed accommodation; and a Thames frontage, made it a building I would be happy to settle in for the rest of my life. The dinner party guests discussed their favourite periods: Julie is medieval and the parsonage has her name on it too; Tim is Palladian and Georgian; Duncan is Victorian and I am a mediaeval/Victorian hybrid.

My visit to the parsonage was all too brief so I did not really take any photographs, but being a fireplace nut I recorded these and I had a photographic reconnaissance round the garden on Sunday morning. When I arrived on Saturday evening, I had no inkling there was any exterior space let alone that a garden led directly down to the Thames.


The terrace by the water will be amazing in Summer. There were steps leading down to the water, and the Landmark Trust could do well by the building by installing a mooring point.

An ancient, just alive, mulberry tree in the garden was propped precariously in position - let's hope it survives for many years into the future.


The fireplace in the drawing room looked like the collision of a Georgian marble fireplace and a deeply carved Victorian dark wood fireplace. Whatever the story behind this chimera, it was obviously bespoke, and its history merges with that of the building. I couldn't help but love this mongrel.

Two women visitors on the open day on Saturday were discovered standing in front of one of the fires. It emerged they had swum across the Thames to get to the parsonage. Emergency beverages were supplied forthwith. "But where did you get changed?" asked Duncan. "We have our ways" replied one of the women mysteriously. Hats off to these intrepid visitors. I have never been able to even manage a cold shower myself.

The incident puts me in mind of Dame's Delight which was nearby. This is the female equivalent of the legendary Parson's Pleasure also nearby. The latter Wikipedia article records one of my favourite related and ribald Oxford anecdotes. One wonders if the eponymous parson of the nude bathing spot, came from this very Old Parsonage?

I had an incredible night's sleep at the Old Parsonage. I have a theory that the older the building the better one sleeps. And I am no longer a Landmark Trust virgin! My observation over the weekend, is that the Trust presents their buildings to the very highest standard.

They set a very high bar indeed for the holiday lets I am planning at Balintore Castle. I was relieved, amongst such perfection, to see naked light bulbs in the dining room chandelier. I have a phobia of naked bulbs in period buildings as they reveal the lighting technology of the day and break the period illusion. I hide all bulbs at Balintore behind glass shades.

Staying at the Old Parsonage is a special and much-to-be-recommended experience. It has spurred me on to try to do something similar at the castle.

One of the utter delights of restoring an "at risk" building is meeting and making friends with like-minded individuals. I am indebted to friends of Balintore Duncan, Tim and Julie who invited me to a dinner party at the Old Parsonage in Oxford yesterday evening.

The Old Parsonage in Iffley is a Landmark Trust property, with open days this Saturday and Sunday (24/25th November 2018). Duncan, Tim and Julie are on hand to show members of the public around and ensure the building is looking at its best. In fact the open day does not finish until 4PM today (25th November) so there is still time to visit.  I implore you not to miss this opportunity to see such a delightful and historic property. You will be made very welcome.

Just 100 yards from where I am currently working is a hostelry called "The Counting House". It was built in 1893, on top of the foundations of a 2000-year-old Roman basilica, as Prescott's Bank. My work colleagues and I love the sumptuous interior. However, this story involves the exterior of the building.

What an amazing coincidence! Presumably the brass fittings at the Counting House were from the same company, so inadvertently I had bought coordinated fittings from the same company but in separate purchases. My two lion's heads were bought in two separate purchases as well, and I was delighted to get a matching pair. I never thought this would happen. I can also now date my fittings to 1893, a bit later than the castle (1860) but within the correct period ballpark.

Lion's head knockers are in essence portal lions in microcosm: those grand statues of lions either side of the entrance ways to ancient cities. There was originally a lion's head bell pull on the front door of Balintore Castle, long since gone but visible in old photos in this blog, which was no doubt inspired by the first owner's name of Lyon.

The morale of this story is that the almost instinctual choices we make in aesthetics, but also in other matters, hold strong truths and patterns that we may not even be aware of. Until that is, we are walking around the streets of London and spot things that are strangely familiar.  :-)