Thanks to friend of Balintore, Paul, for alerting me to this rather fine watercolour from 1856 by William Collingwood Smith held by the British Museum. It shows what is now known as Balintore House, a magnificent Georgian-looking structure at the bottom of the castle's west drive. This building was known in the 16th century as Balintore Castle i.e. it is nothing less than the fabled earlier medieval castle that maps show existed more or less on the same site.

The water colour is of particularly good quality, and aside from exaggerating the vertical scale of the surrounding hills in best romantic movement tradition, it presents a detailed and no doubt accurate depiction of Balintore House at the time. Most of the towering chimneys have now gone, as has the farm building in front and the hay ricks! However, hay bales are still stored in black polythene on this level site, so plus ça change. The magic thing for me is that if you screw your eyes up and look at this painting, you can still get the impression of a mediaeval tower house, which is far from apparent from the extant structure.

Thanks to friend of Balintore Castle,  Jack,  for alerting me to Balintore Castle's appearance in Private Eye magazine a few weeks ago. Unusually, there is no satirical content in this article which reports on the concerning and rapid deterioration of a nearby mansion in Angus called  Letham Grange (circa 1830) owned by a Mr. Liu.

Now Mr. Liu was the previous owner of Balintore Castle, and the article tellingly states "Liu has form for buying historic property in Scotland and presiding over decay." When Mr. Liu got into financial trouble some years back, Letham Grange went into receivership and I assumed that the future was bright for the building and that a new purchaser would save it. However, somehow, the building ended back in the hands of Mr. Liu in 2018.

Some architectural friends visiting me at Balintore a couple of months back, called over to Letham Grange to scout it out. They came back with a very sorry tale indeed regarding the state of the building. Letham Grange was running as a luxury golfing hotel until 2002, so the moral of this story is that deterioration can occur very quickly indeed if a building is neglected.

The other article in the photo is more light-hearted. i.e. the planned removal of 299 extant gas street lamps in Westminster by the Council. "Shame!" I hear you rightly cry. It is a little known fact there are 3000 gas lamps still operational in London. I certainly noticed a good number when I was working in the City itself, and I enjoyed the guttering historic vibe greatly.

I am deeply indebted to "friend of Balintore" Kevin for tracking down an entry on the Balintore Estate in "The Highland Sportsman" published in 1882.

The castle is described as "handsome and modern", and I daresay in 1882 it was indeed a relatively modern building. The Balintore Estate is 4,400 acres, including 600 of farmland and 100 of forestry.

The book is organised county-by-county and is a fairly dry detailing of estates, land-owners, mountains, lochs, rivers and telegraph offices in each county. This is all grist to the historian's mill of course, and in pre-Internet days this information had to be detailed somewhere so hunters could plan their shooting holidays.

The Highlands are presented as a sportman's paradise for the bagging. Though some nowadays find this politically contentious, I merely see it as a marketing opportunity to sell holidays and the book contains much advertising for travel and accommodation.

In the list of chief landowners of Forfarshire (now Angus), Thomas Chirnside of Balintore Castle does not even make it into the top 20, coming in at number 23 with 3,800 acres. This does not tally with the previous figure, unless Thomas Chirnside did not own the smaller agricultural section of the estate. Thomas Chirnside bought Balintore in 1877, and the date of 1882 tallies with his known ownership timeline.

There are not many pictures in the book, but the charming frontispiece illustration is of Duncraig Castle which by coincidence was an alternative purchase I considered, when Balintore was proving problematic to say the least.

Duncraig as pictured above is considerably more attractive than the present day structure which is missing the three turrets and conservatory that are shown.
To finish off with, I could not resist the entry for Killiechassie, now J.K.Rowling's highland retreat, which in 1882 was also prime shooting territory.

I do hope the choice of stories in this book is as solid as their choice of cover girl. You can order your own copy of "Legendary Scotland - Myths, Folklore and Unexplained Events" here. The marvellously atmospheric photo is courtesy of the very talented Hamilton Kerr of Kirriemuir.

I have just ordered my copy of this new publication, and will peruse for suitability as a seasonal stocking filler. :-) 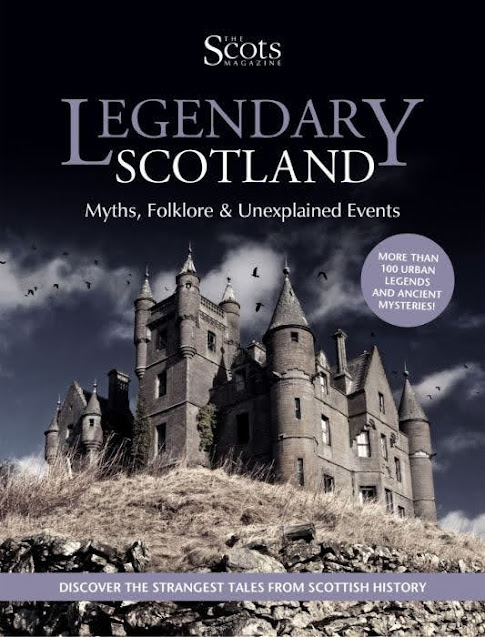