It is only now, given that the last of the snow departed from Balintore Castle just yesterday, that I feel I can make a blog entry about the harshness of this winter without tempting providence. The last month has been particularly hard with a neighbour recording a morning temperature of -18 C. At the same time, nearby Braemar, recorded -23 C, the coldest UK temperature in 26 years.  The castle is at an even greater altitude than my neighbour, so I suspect Balintore was challenging Braemar even more closely!

My builders, Greg and Gregor, were unable to get to the castle at all for around a week. Eventually, they managed to get to the end of the drive, but had to make the rest of the journey on foot carrying tools, etc, all the way up the steep and icy slope. I would like to thank them for going well beyond the call.

This has been the most extreme winter since I bought the castle. It has never been so cold and the snow has never been so deep. The winter of 2010 was more prolonged with my dishes frozen in my sink for three months solid, but it only reached -15C.

Of course, with the big thaw the plumbing inside the castle is now leaking and the roof leaks have re-opened up. The result has been considerable water damage, and some new plasterboard walls will have to be done again from scratch. This is the most demoralising situation: things are going backwards and I have to pay again for the same work to be done again. :-(

The cold temperatures managed to burst open two separate kitchen mixer taps! Neither my builder or myself have ever seen anything like this before: normally the weak points are the pipes themselves or the joints.

A few days ago my friend Paul kindly delivered some auction items round to the castle for me. His car couldn't quite make it up the drive due to the ice, so he carried each auction item up by hand, including a stuffed stag's head mounted on a plaque and a large glass case containing a stuffed gynandromorphic pheasant. It must have been exhausting! Just as he delivered the final auction lot by hand, a mutual friend drove up to the front door of the castle in a their 4x4! Again huge thanks for going beyond the call. I was not around at the time, so could not have helped - just in case anyone wants to make me feel guilty, lazy or both. :-)

Gynandromorphic, I feel, requires a definition. This is an animal that is partly male and party female. In this instance, the head is male and the body is female. Greg suggested a "cut and shut" job, a phrase which I had to look up. :-) However, I suspect this is very much the real deal, and I like to think that Balintore embraces the gender fluid, in a way that doesn't bend to the current fashion. So if you ever visit the castle and wish to be introduced to the resident gender-fluid pheasant (Victor/Victoria as I have named them) then I would be only to happy to make the introductions.

One of my lockdown tasks has been tidying up old file systems, and I was delighted to come across some photos my friend Andrew took at a bonfire party on the 14th October 2008. This was before I started the restoration blog, so now seems to be the right time to put these online. In fact I lost the photos again almost immediately and had use "Picasa" yesterday to grind through my file store to re-locate the images.

By a happy accident, the red of the bonfire glow and blue of the evening sky work wonderfully and naturally together . No "colour grading" beloved of modern cinema was required. In consequence, they are some of the best images of the castle ever taken and even Andrew was pretty chuffed by his good fortune. 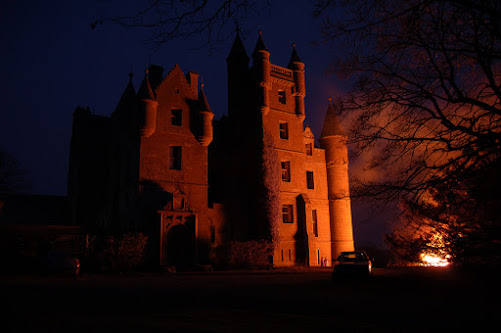 In fact, the photos were taken before most of the guests arrived, but we thought we better light the bonfire in advance as they can take some time to get going. This may have been the time we lit the huge bonfire in advance, only to find it went into rapid combustion that was akin to nuclear fission with essentially the whole bonfire burning away in 15 minutes before the guests arrived. Thankfully,  bonfires tend to have a long afterglow with considerable radiant heat, which works well at an open air event. In 2008 there was essentially no usable internal accommodation at the castle. 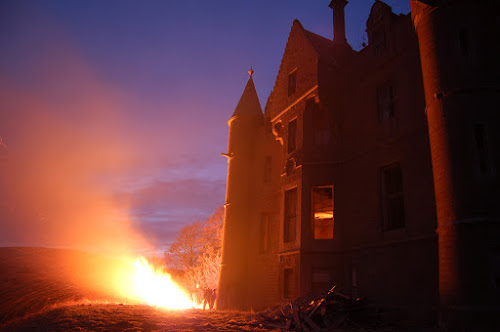 I was wondering about the identity of the small figures by the base of the tower. Andrew identified them as his father and his friend Irene. Andrew's father lit the bonfire and held a newspaper aloft for fun during the long timed tripod exposure. 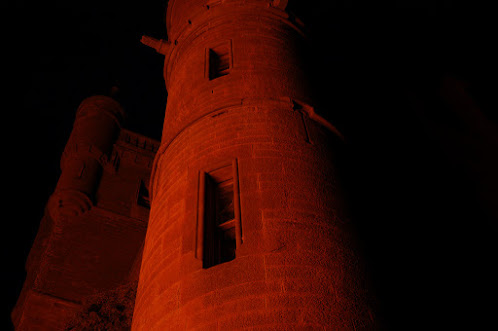 During the early years at the castle I always held an annual bonfire around Guy Fawkes, and this is something that I should reinstate. Because, there were no facilities at the castle, this was the only type of party one could have, so one did it for morale. Anyhow, post-covid, watch out for those castle events.