Ahead of the Herd

A friend of Balintore has kindly volunteered to have a go at restoring the original bath from the castle which was discovered rather the worse for wear in a local farmyard being used as a cow trough. He very nobly refused payment and I did my best to offer him something "in kind", but to no avail.

Many weeks later, he said that if I found any African taxidermy at an auction, he would quite like such an item. This was an ideal compromise: I check out the local auctions fairly regularly so it is no extra effort to register whether an Impala is looking back at you.

After many months of failed bids, some Antelope horns appeared at a local auction room yesterday. I made a sensible but still modest bid. I know it was a sensible bid as the amount I paid on winning the lot was my maximum bid i.e. someone else would have offered just below this value. OK, so it was not proper taxidermy as such, but I knew it was a fine pair of horns. Proper taxidermy of African specimens carries a price premium, but I had seen some items go for reasonable prices so it was just a question of waiting and pouncing like an African lion. I knew I could not win on an African Cheetah "on price" race. :-)

Curses, I rather fancied the Antelope horns for the walls of Balintore: I was on the horns of a dilemma. :-) I had to steel myself (like an African Black Mamba about to strike) to offer the horns to my friend today for the greater good. Anyhow, it turns out my friend is currently planning a house move, so decorative items are now not on his agenda and Balintore is the unexpected beneficiary.

Just in case anyone thinks I am of the "animals are for trophies" persuasion, let me tell you a current tale. A pigeon has taken up residence in my kitchen and has been there for the last 3 days. I have been trying to gently persuade it to leave, with open windows and doors being proffered, but to no avail. And I am not the type of person to get a pigeon into a flap. I am a bit concerned about the health of the pigeon. Perhaps it is ill and has taken shelter indoors? Perhaps, it knows it is going to die and wants to spend its last days in a Highland Castle (sounds familiar?). As I have not been bothering the bird, it sits just a few feet away from me. I have recently started feeding it and giving it water so it would not die on my watch. It appears desperate for the food.

I pointed out my new friend to Gregor this afternoon and he immediately started the shooing-out behaviour. And later in the day Gregor reported the pigeon has now gone. I am relieved overall, but one of my theories is that you should allow relationships to develop with the other animals on the planet.

Blog updates this year have been severely impacted by the day job. However, it is good every so often to escape from the world of work, and enjoy what the castle and the beautiful surrounding countryside have to offer. The best way of doing this is to have friends over. So on Friday night I had a mini-dinner party to celebrate the full moon, including special guests from London and Edinburgh.

As my London friends left the castle late in the evening (heading back to Dundee) they took these photos. The photos may be a bit blurry, but they capture the amazing sky that night. 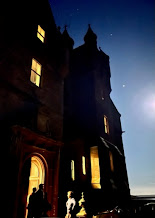 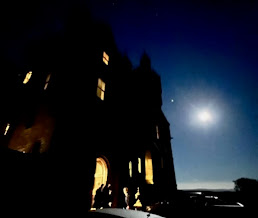 On Saturday morning, my friend Paul and I decided to take advantage of the glorious autumn weather and go for a walk. It was like a dream of summers past, as in one's head one knows that summer had gone, but with the bright sunshine, the warmth of the sun and much vegetation still green, it felt otherwise.

Normally, I am leading guests on walks and determine in advance a route based on how long or how a short a distance might suit them. One has to err on the side of caution and indeed calculate the lowest common denominator within the party. The outcome tends to be one of three short standard walks in the immediate vicinity of the castle. The irony is that I personally like to go for long and unplanned walks.

Paul seemed to be striding out ahead on his own, and I mentioned I was very happy for someone else to lead for a change.  After we had gone a considerable distance along the road away from the castle, we passed a junction that would have been part of a reasonably sized loop, that I have never done before in its entirety. Paul, however, continued straight on. I decided not to comment so as not to compromise his open-ended exploration. The next junction we reached was one where the loop to the left and the loop to the right would have been enormous, and I finally felt the need to intervene and mention that the only sensible next move was to retrace our steps. Paul agreed: I don't think he had thought the route through and just "took off".

I am afraid I was very honest and mentioned that I don't like retracing my steps on a walk. After 50 yards or so, a gate opened off into a forest on the right hand side of the road. I asked "Shall we just head off in that direction?". I instantly chickened out for fear of getting lost or getting stuck, but Paul wanted to do it.

Both Paul and myself have a spirit of adventure, and putting us together was perhaps not a good idea! :-) We got deeper into the forest, but there was a kind of route along the bank of a river that ran through a gorge in the forest that we followed. It wasn't a clear route i.e. we did have to climb over trees felled by Storm Arwen, but it was more or less passable with a little effort.

Then I spotted a huge tree that had fallen over the river. "Would you be able to get across that?" I asked Paul.  Paul then set off tightrope-walking along the trunk that was angled at perhaps 20 degrees upwards. I was convinced Paul was only going to go part of the way, and not run the risk of falling into the river, but he reached the other side! There was no way, I was going to tightrope walk myself. Well OK, I will just do the first section and then retreat. Holding onto the tree's branches were a way of staying upright, but when the branch came out of the very top of the trunk, one had to navigate one's way around. It was all rather hairy. However, against my better judgement I found myself on the other bank of the river.

We then set off travelling through an even denser part of the forest. Trees had fallen on top of trees in last year's storms: the trunks perhaps were four layers deep. The only way to make progress was to walk along tree trunks, then climb onto other trunks. Occasionally one had to climb down to ground level, or simply mountaineer over walks of trunks, that blocked one's path. It was totally exhausting. Paul was progressing faster than I was, but we shouted directions to each other to escape the forest in the quickest way we could. Instead of going along the river bank, we aimed for higher ground where it looked like the forest thinned out. At one stage, I was so tired I decided to give up. However, there was no giving up: the route in front of me was arduous but the one behind me was possibly even more arduous.

We were so relieved when the forest thinned out. This is when I took this photo of Paul: I was no longer in pure survival mode. However, you can see the obstacles ahead were still considerable. 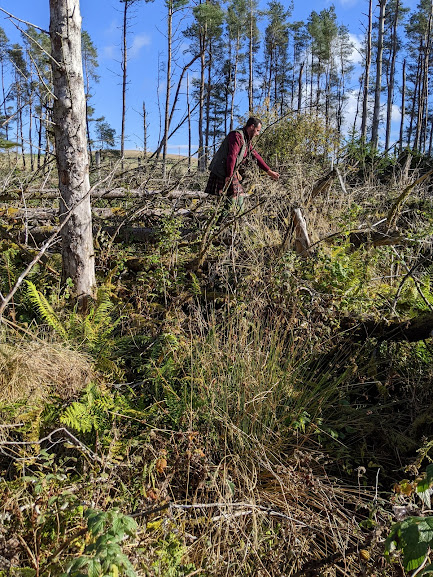 We finally made it back to the road leading to the castle, but every rise in altitude was painful as we were both exhausted. We could see the castle in the distance, but when we went round the next bend it seemed even further away. When we finally got back to the castle, Paul passed on lunch (?!?!?) and headed off home after a large cool drink.  Quite how one can pass on food when one has burned an excess of calories is beyond me.

Anyhow, I was much revived by food and drink but clearly any form of physical activity was off the cards for the rest of the day. :-) We had both really enjoyed the walk and the adventure, even if the adventure side had been rather too much for either of us, but the experience definitely reset our head spaces marvellously.

What I can't get over is that Paul did all of this in the kilt he had worn to the dinner party!