This blog entry features an invaluable document from the archives, which helps to pin down the construction window for Balintore Castle and the ownership timeline for the Balintore Estate. Many thanks to polymath (incorporating Glen Isla amateur local historian) Kevin Greig for sending me the scan.

The scan of the front page of "The Montrose, Arbroath & Brechin Review, AND FORFAR AND KINCARDINESHIRE ADVERTISER" dated May 11th, 1855 features an advisement, dated 3rd May 1855, for the upcoming sale of the Balintore Estate on the 29th May 1855 by public auction at the British Hotel in Dundee.

The British Hotel building still exists in Dundee at 2-4 Castle Street, classically embellished in the late 19th century, and now sadly featuring in the Scottish Buildings at Risk Register.

The text of the advert is here:

VALUABLE HIGHLAND ESTATE IN FORFAR-
SHIRE, FOR SALE.
There  will  be  sold,  by  public roup, within the British Hotel,
Dundee,  on  Tuesday,  the  29th  day  of May current, at one
o'clock, afternoon, unless previously sold by private bargain,
THE   ESTATE   OF   BALINTORE   and   EASTER  COUL,
in    the   parish   of   Lintrathen,   consisting  of  the  sunny
third  part  of  the  Town   and  Lands  of  Wester  Glenqhuarity
and   Balintore,  those  portions   of   the  Land  and  Barony  of
Eassie  called  the  third  part  of the lands of Glenqhuarity, and
of   the  third  part  of  the  Lands  of  Coul:  together  with   the
share  belonging  to  the  Estate  of the undivided Commonties;
all  as  it  belonged  to  the  late  Charles  Lyell, Esquire of Kin-
nordy.
This  Estate is composed of the two Farms possessed by Mr.
James   Wilson   and  Mr.  Peter  Duncan,  with  the  Woodland
and the Hill Pasture and Hill Commonties.
An  action  for  division  of  the  Commonties is in progress.
The   proper   Estate,  without  the  Commonties,  is reputed  to
extend  to  about  830  acres ; of which 367 are arable, 208 hill
pasture,   and   67  thriving  plantation.  The  Commonties   are
reputed  to  extend  to  from  4000  to 4700 acres, large portion
of which must fall to this Estate in the division.
The   Water   of   Quharity   runs   through   the   Estate.  The
Loch   of  Lintrathen  is  only  about  two  miles  distant.  There
is  good  Grouse Shooting on the Hills, giving great promise of
making   a   most  desirable  station  easily  managed.  There  is
good  accommodation  for  residence  on  the  Hill in a superior
Farm  House  built  by  Mr.  Lyell  for the very object, and long
used  by  him  and  his family. For any one desiring a residence
of  a  better  kind,  there  are excellent sites giving great beauty
and great convenience for sport of all kinds.
The  distance  from  the  Meigle Station of the Scottish Mid-
land  Railway  is  only  about  eight  miles, by excellent roads ;
so  the  residence  is within about fifteen hours of London. The
entry  and  payment  of  the  price  may  be arranged to suit the
purchaser.
The whole Lands hold of the Crown for payment of a penny
Scots. The fee is full. The Teinds are valued and exhausted.
For  further  information,  application  may  be  made  to  C.
Kerr  &  Co.,  Writers in Dundee, who are in possession of the
title-deeds.
Dundee, May 3, 1855.
A small glossary to help with the text above:
All these terms are new to me but I particularly love the word roup. Roup.com would be a good competitor to eBay. :-)

The associated scan is here:

It is hard to ascertain the actual amount of land in the Balintore Estate at the point of sale. I am not quite sure what is going on but I suspect the commonties may be the old common land that in the Victorian era was often moved into private ownership. So the Estate is anywhere from 830 acres to perhaps around 3000 acres, assuming it incorporates 50% of the commonties mentioned.

The dates suggest that David Lyon bought the Balintore Estate from Charlie Jnr. in 1855, possibly at the public auction or possibly by prior private bargain hinted at in the article. The article mentions the building of a superior house, which suggests that David Lyon was perhaps already on the scene, as this was his exact plan. The farmhouse referred to is "Balintore House" which is a large impressive building and would be suitable for most people's needs. On the other hand the Lyell's lived at Kinnordy House and at that stage Balintore House was operating as a farm house, despite having once been a castle, so an aspiring gentleman landowner might not have stooped to occupying a farmhouse?
Perhaps, the threat of the public auction was a way to get Lyon to increase his bid for the estate? An article from 1858 detailing building plans for Balintore Castle says that Balintore Estate was purchased "some time ago" by David Lyon. This leads me to conclude there were no intermediate owners between Charlie Jnr. and David Lyon.

The spelling of Balintore is notoriously fickle. It has its modern form in this 1855 article, but is Ballintore in the 1858 article.

There was a very good chance that Balintore Castle would have looked nothing like it does today, because the first architect employed was Sir Charles Barry. Barry famously worked with August Welby Pugin to design the present Houses of Parliament. I have been trying to hunt down Barry's plans for Balintore, because the prospect of a debating chamber instead of a dining room, and a members' lobby instead of a library is quite a charming one. :-)

The following article appeared in the Aberdeen Journal on Wednesday, September 29th 1858:

BALLINTORE  ESTATE,—Sir   Charles   Barry, the eminent
architect  of  the Parliamentary buildings, visited Ballintore,
near  Kirriemuir,  on  Friday  last.  This fine Highland estate
was  purchased  some  time  ago  by David Lyon, Esq., Lon-
don.  Since  he  became  proprietor, vast sums have been ex-
pended   on   building,   making  roads,  and  other  improve-
ments;  and  the  proprietor  is  now  about  to  erect a family
mansion,  of  extensive  size,  to  be  richly embellished. It is
said the design and plans have been prepared by Sir Charles,
in  connection  with  which  his  visit  to  the  district was oc-
casioned,   in  order  to  superintend  the  staking  out  of  the
ground  plan  of  the building, which will cover an area of 75
feet  square.  The  front  building  will  be  40  feet in height,
with   lofty  towers  at  each  angle,  finished  in  true  castel-
lated   style.  Specimens of  stone, square and polished, from
various   queries  in  the  country,  have  been   forwarded  to
London,   to  enable  the  architect  to  determine  from  what
quarry   the  hewn  work  will  be  taken.  From  the  quantity
required  (upwards  of  700  tons),  it will take a sum not less
than  from  £10,000  to  £12,000  to  erect and finish this fine
building,  which  will  far  surpass any mansion of its kind on
the Braes of Angus. The site selected is a very fine one.
Here is the scan of the journal page containing the article:
There are two obvious questions posed by the article:
Change of Architect
Barry died on the 12th May 1860, and suffered bouts of illness from 1837 onwards. One of the most severe bouts was in 1858, the date of this article. It is an easy conclusion that Barry gave up on the commission due to ill health, and that William Burn with his established reputation took over. The description of Barry's building, in its essential details, tallies with what Balintore is like today and the article implies David Lyon was happy with the plans, because the building was staked out.

So rather than any artistic differences between client and architect, it sounds like Burn simply took over where Barry left off, probably using the same dimensions and ground plan. However, how this volume was filled-in eventually was very much in the Burn style.

Update:
Dr. Paul Bradley, who did his Ph.D. on William Burn has supplied the following update, in response to the earlier version of this blog article, which supports my theory:

"When it comes to Barry - he and Burn were friends, and I expect ill health meant he simply advised his client to contact the Stratton Street office. My feeling has always been that Burn (due to his own ill health) worked on this commission closely with his nephew MacVicar Anderson. "
Timescale of Build

I have often been asked how long the building took to build. My reply is "I don't know.". Dr. Paul Bradley says there are no written records for the construction of Balintore, unlike other Burn buildings.

A wooden plaque dated Nov 28th 1860 was left in the sawdust insulation of the water tank at the top of the Great Tower by the castle carpenters. There are date stones of 1860 on the castle's west and south elevations. I am guessing this is the nominal finishing date, but the date on the plaque is at the end of the year so I am presuming finishing-off continued into at least 1861. It is notable the gate lodges were not present even as late as 1862.

However, this article dated Sept 29th 1858, before construction had started, suggests the build was essentially complete within 2 years, with the Great Tower certainly designed and raised within this period.

Update:
I found this 2 year period hard to believe, but friends have been informing me of the surprising speed of Victorian country house building. James Hollis who is working on the restoration of Burn's Revesby Abbey in Lincolnshire reports:

"Revesby’s plans are dated 1843 and all of the finished dates around the house state 1845 so we’ve been thinking ours was built in two years as well which is unbelievable."

I should point out Revesby Abbey is around 5 times the size of Balintore!

One of the great debates in architecture is the balance of works at the Palace of Westminster between Barry and Pugin. Pugin, I should say, is a great hero of mine, and I also love the work of his fellow maverick neo-gothic architect William Burges.

The received wisdom when I was growing up was that Barry was the architect of the Palace of Westminster. Pugin assisted Barry and designed the interior. However, the current view as far as my understanding goes is that Barry and Pugin should be given joint credit.

If you peruse the following property page from the "Aberdeen Press and Journal" dated 25 February 1992, you may spot a charming interloper. However, if you dislike challenges please scroll down as all will be revealed. 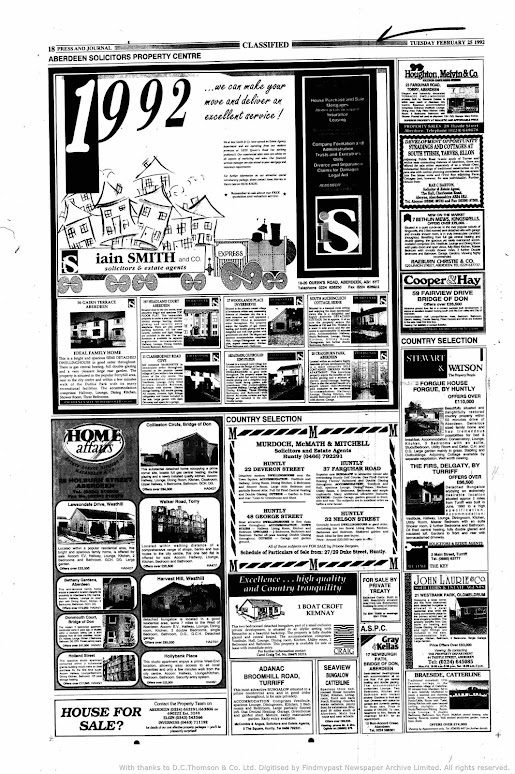 Anyhow, nestling in the centre of the bottom-left quadrant of the page is the following:

Yup, in the company of humdrum domiciles, Balintore Castle was for sale. The past is certainly a different country, and property specs in the 1990's were not the cornucopia of Primelocation or Rightmove. One was largely restricted to limited details for local properties through the print media.

Tellingly, there are no details on the magnificence of Balintore. This is a developer trying to offload the castle which is, by then, in a pretty sorry state. I am unware who was selling Balintore in 1992, and don't know if anyone purchased the building at this time. If you have this information, please get in touch.

The Moon and the Castle

Many thanks to the talented Bill Nicoll of Kirriemuir for this arresting image of Balintore Castle. A number of people shared it with me on Facebook, so it felt right to archive it in this blog. Bill had given his permission, of course, and guiltily admitted to some photo-shopping.  This is beside the point of course, Bill has captured the true spirit of the building from the romantic era

To donate to the Balintore restoration project click here.