Some days ago I was clearing out the room that is my "bathroom to be" at the castle. This is because I am finally taking action for it to actually be a bathroom.

There were 4 boxes wrapped sturdily in black plastic. What on earth could these be? I looked in one box and found a large Bob Marley flag - I had absolutely no recollection of this object. Had I converted to Rastafarianism, and been deprogrammed by some well-meaning secularists, who had stuffed the evidence of my colourful past in these boxes? Was I perhaps now merely a residual Rastafarian in my subconscious?  I waved the flag wanly in front of my face to elicit any memories, none came.

Out emerged another more attractive flag with golden castles (I was liking this already) on a green and red background. This would look lovely on my castle "flagpole to be", but again I had never seen this flag before in my life, and doubts in my own sanity were coalescing.

I opened another of the containers, the box was one for a shuttle computer - and I suddenly twigged! These were the boxes my Turkish tekkie friend Gorkem, had left in the castle 2 years previously before emigrating from Scotland back to Turkey. Phew! The irony was that he was coming back to Scotland the following weekend for the first time in two years. I alerted Gorkem to his long lost chattels, and the successful reunion has now taken place!

Gorkem left some of the chattels including the "golden castle" flag. Buoyed by my genealogical detection success (see the previous blog entry comment)  could I now identify this flag? I am not an expert in vexillology (the study of flags) but hey, I got the Internet and I'm gonna use it!.

May I introduce you to the marvellous:

for identifying flags. I looked up the Jamaican flags obviously, but the "golden castles" flag was nowhere to be seen. I entered the attributes of the flag (red and green with a coat of arms) on the search page, and lo and behold 20 or so flags popped up. One of these, the Portuguese flag, matched perfectly. Success!

Of course, why a Turk in Scotland should have a Portuguese flag, let alone leave it before flying to Sweden is one detective investigation too far for this evening.

Up The Flue With a Frozen Banana

A certain sort of madness prevails at Balintore: one finds oneself doing things that when viewed objectively in the cool light of day appear very strange indeed. One evening after tea, my friend Andrew walked in on me, standing inside the huge fireplace in the castle kitchen. My head had disappeared up the chimney. In my hand was a frozen banana - which was my simple, delicious and economical dessert for the evening. I was studying the shape of the inside of the flue, as an experiment earlier in the day has revealed the draw was not yet correct for an open fire.

Needless to say, Andrew burst into laughter at the eccentric spectacle in front of him! :-)

And for this blog entry's picture. A local friend alerted me to the fact that the local church (Lintrathen) had closed down and was selling off its fittings. Two charming church personnel, greeted me outside the church this morning at 11AM and showed me around the remaining pieces. I am now better off by a redundant communion table. :-) This is a lovely piece in oak in memorium of one Charles Chree who was minister there between 1855 and 1893, and I feel there is good karma in keeping this in the locality: Lintrathen is the closest church to the castle. I was also offered the pulpit at a very good price. This is a marvellous monumental piece which you can see in the picture behind the communion table. As much as I would loved this, even with a castle, I was wondering where I would put it. Should I have gone for it?

By an irony of timing, the deadline for offers on the property was at midday today, while I was looking around the building. They are looking for offers in the region of 50k, and I understand that at least two sealed envelopes have been deposited with the solicitors.

My slater Andy came with me as an informed second opinion on the pieces for sale. However, he was straight in with a workable solution to sensitively convert the building into a domestic dwelling. So many churches and chapels have been badly converted, but Lintrathen looks very convertible modulo planning permission. Andy was admiring the brass and iron umbrella stands, and was offered these for free! Some people are just lucky. However, he has generously donated some to the castle.

I reflected upon the sadness of a building's well-coordinated fittings leaving and of a building ceasing to function as originally intended - it had been a church since 1801. De-consecration is the emasculation of a church. Yet, a new life awaits this picturesque building, and I wish the new (as of today) owner the very best of luck.

A number of people have put such stunning photos of last Saturday's party at the castle on Facebook, that I do not feel I can compete. However, here is one photo just for now as a place holder, showing the wicker man in mid conflagration - just before bits started dropping off. Next to the castle is the small Glastonbury-style tented village of mid-summer revellers. Thanks to Hew for the photo. 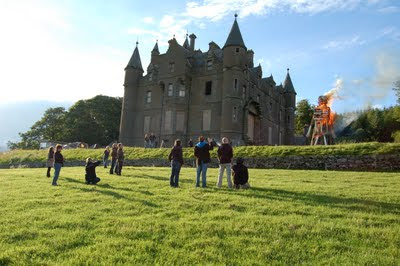 I managed to extract the coordinates of the Balintore Castle PhotoSynth point cloud, using a program called (unsurprisingy) SynthExport. Download from:

This can export to a number of formats.

I used FreeWRL to visually verify the output. Download it from here:

The X3D output failed for some reason, but the VRML output is shown below: 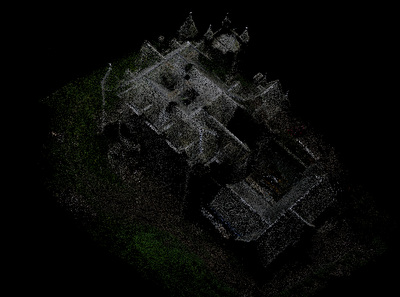 This proves the data was successfully extracted from PhotoSynth - hurrah!
Posted by David at 16:18 No comments: 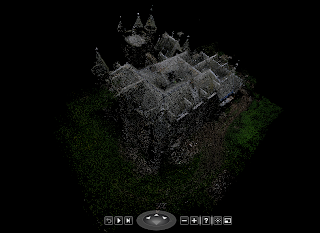 Should post-party blues be called post-party-um? :-) In fact, after recuperating from the sheer physical hard work of organising the party, the event has left me really motivated to redirect the same level of energy towards the castle restoration after many days of  not being able to.
Posted by David at 02:38 No comments:

I thought you might like a preview of the wicker man, my friend Andrew and I constructed for this Saturday's party at Balintore Castle. How Andrew managed to find the strength to get the head on, I shall never know. I am deeply indebted. 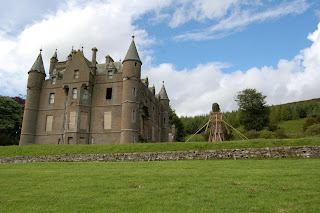 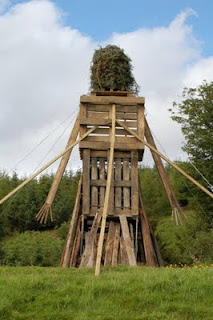 A Poem For Today

While stationary in the Edinburgh rush hour traffic today, after picking up items bought on gumtree for the castle, I composed a poem in my head, Here goes ....

Kincardine, Kincardine, Forth, and Tay
These are the bridges I have crossed today
"Kincardine twice?" I hear you say
Yes, my GPS led me astray!

I have no explanation of why this popped into my head, but I do offer my humblest apologies for sharing. :-)
Posted by David at 12:38 5 comments:

And Then It Was Gone

In the Balintore Castle laundry, there was a "copper" - this is a large copper bowl, situated above a coal fire, in which the clothes and sheets are boiled. When I first saw the castle, the copper had disappeared and the brick structure holding the vessel, had half collapsed with the remainder being extremely unstable.

Today, my roofer Andy and myself undertook to remove the final remnants of the brick structure - some friends had removed a large chunk the day before - but I stopped further progress because the flue above the boiler looked set to collapse and I didn't want my friends to be in any danger. I was hoping that the flue built into the wall would support its own weight, whether the boiler was there or not ...

Anyhow, I took a picture of the scene, left with a barrow of rubble - but stopped in my tracks and rushed back when I heard a noise like an earthquake accompanied by a "Whoa!" from my roofer. My roofer had removed one brick from the top of the flue, and the whole structure had detached from the wall cleanly in a one-er - looking, apparently, like the collapsing twin towers.

Thankfully my roofer was on the top of a ladder and I was out the room - the flue was obviously NOT built into the wall and would have had to be removed in any case for safety. The after photo is 12:43 - little did I know at 12:40 when the before photo was taken that the transition would be so immediate. It was only a few seconds. the delay of 3 minutes is largely me regaining my composure.

Blogging this from a friend's house :-) still no InterNet at the castle. :-(