Thanks to friend of Balintore Emma for pointing out that Balintore Castle is currently feeling the love on "Visit Scotland" on Instagram with 25, 387 likes ! 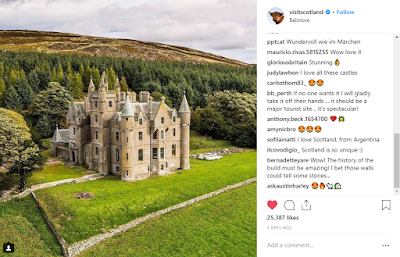 I managed to get the photographs from the Storrier family archive (mentioned in a previous blog post) scanned in by the Angus Archives last week. The digital images arrived by email just in time to incorporate them with the talk I gave last night (Thursday 4th October 2018) to the Forfar and District Historical Society. It was thrilling to be able to present these in public for the first time. The venue was the East and Old Church Hall, Chapel Street, Forfar. I was delighted by the excellent turnout and warm reception.

Anyhow, without any further ado I will present the digitised images below. These have to be watermarked for the blog sadly. One character, a bearded and rather smiley gamekeeper appears in more of the photos (i.e. 4 of the 7) than anyone else so his changing appearance is a useful cue to putting the photos in temporal sequence. The changing ladies hairstyles is another clue that the photographs were taken years apart rather than in just a single shooting season.


The first photograph looks to be the only one that shows "guests" as well as "staff". To my eye, the three people sitting on chairs on the left, as well as the boy in front are guests. The cap of the seated gentleman on the right and his literal separation from the three guests (social divide?), is instant condemnation to the lower ranks. :-) Here the smiley gamekeeper is photo-bombing the party, quite an achievement for the 19th century, and one feels that he is very much his own man and would be great company.


The second photograph shows the brass lion's head bell pull on the right hand column very clearly. Long since gone sadly! The smiley gamekeeper has a little grey in his beard, so I suspect this is the latest photo. All the women have a "bouffon" hair thing going on, that may be Edwardian. Can anyone date ladies' hair-dos? I have naturally tried googling, but got nowhere.


In the third photo all the women have a parting! The man with the stick (bottom right) is William Fenton Senior; his wife is next to him. Thanks to a plea on Facebook for putting names to faces in old Victorian photos - I doubted whether it was even possible being so long ago.


If has been suggested to me that the fourth photo could be as late as the 1940's, as tractors only took over in the late 40's and were certainly in operation at Balintore home farm, where the picture was taken, in the 1950's.


The fifth photo shows a younger gamekeeper, so I suspect this is the earliest photo. This is my favourite as it shows the servant retinue in its full Victorian heyday with cook and footman.

Balintore home farm, in the sixth photo, most recently operated as a sheep farm. However, a little earlier it clearly had goats!

The seventh photo has a great view of the castle from what is now known as the Auld Smithy.