More goodies are emerging in the lock down paperwork tidy. In 2007, at the time of the compulsory purchase of Balintore Castle a friend sent me a photo of their TV screen, with the news item featuring on BBC Scotland's CEEFAX service. I was astonished then that CEEFAX was still on the go and indeed that CRT televisions were still on the go. In 2021 this appears even more of a blast from a lost and almost forgotten past, very much like Balintore Castle itself. 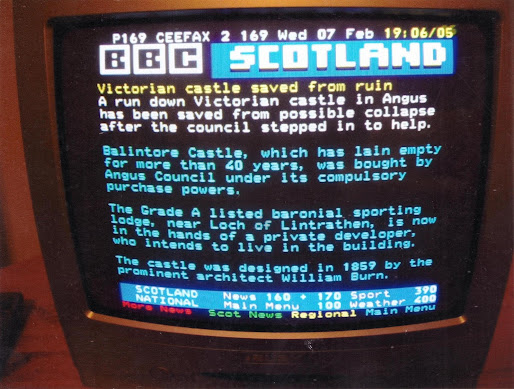 CEEFAX was the BBC's teletext offering, and ORACLE was the ITV version. I can recall teletext as painfully slow, and I only really used it for TV listings and downloading programs for my BBC Micro.

With tweets at 280 characters (originally 140) we have come full circle again in text limits to get things across!

Wikipedia tells me that CEEFAX closed in 2012, but effectively it was heading stage left in 2007 with the start of the digital switch over and of course the Internet had long since made it redundant. It feels weird that this photo condemns the castle and myself to the teletext generation, but there is the incontestable evidence.  :-)