On the back of a Balintore ghost story reported in a newspaper, which I presented in a previous blog entry, I purchased the biography of Mabell Countess of Airlie entitled "Thatched with Gold" which allegedly holds the original account of the story. 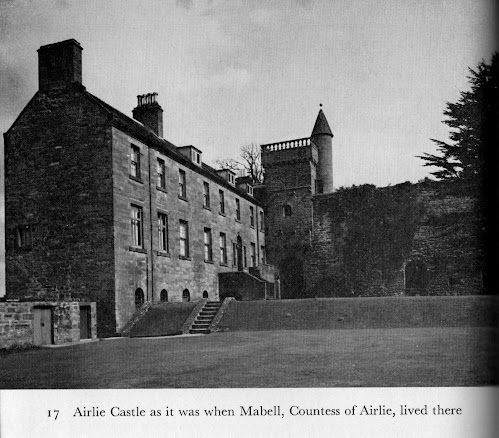 Oddly enough, in this area of the Airlie Castle gardens which was leading down to the river and which I was exploring on my own, I got a very chilled feeling and decided to head back to the castle. I recall puzzling that here was an idyllic castle in idyllic grounds, yet I wasn't getting the expected pleasure from exploring them. The two other things I recall from the open day are a severe case of box blight in the walled gardens, and that all the family members had the same nose. :-)

Airlie Castle is just 8 miles due south of Balintore, and well worth visiting if you get an opportunity.

I very much liked Airlie Castle, despite the gloom of that one location, particularly the mammoth curtain wall from the 15th Century which somehow anchors the habitable part, an 18th Century mansion house, to the past.

Fortunately, the biography is a good read. Lady Airlie was the Lady of the Bedchamber (i.e. the most important lady-in-waiting) for Queen Mary, so there are good royal anecdotes, which ensured the book a reasonable circulation when it was published posthumously in 1962. 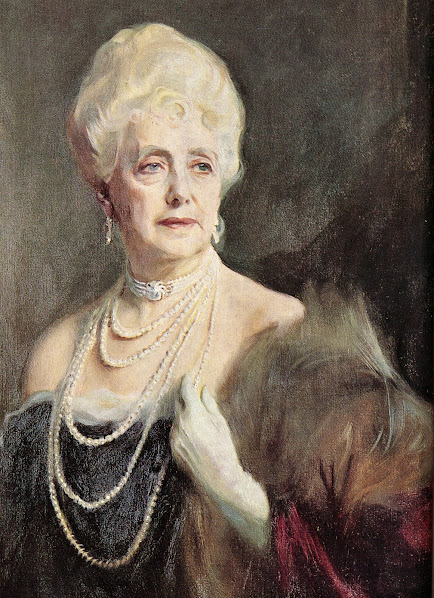 Airlie Castle use to serve as the dower house for Cortachy Castle, so Lady Airlie moved there when she was widowed by the Second Boer War of 1899. This gives the context for the ghost story in the book, which I shall now present complete as an antidote to the confusions of the newspaper article.

Extract from "Thatched with Gold" by Mabell Countess of Airlie
Airlie—the smallest castle in Britain—was romantic and mellow with age, but uncomfortable in many ways when she moved into it. Built in the fifteenth century on a promontory at the conflux of the Melgum and Isla rivers, it had been originally an almost impregnable fortress, accessible only on its south side, which was protected by ten-foot-thick stone walls and a drawbridge. But it had borne the brunt of the Ogilvys' loyalty to the Stuarts, and in 1640 the whole building had been burnt to the ground by the Earl of Argyll and his clansmen. A later Lord Ogilvy had rebuilt it from the old battle-scarred stones but on a reduced scale. There were only three masters' bedrooms and two small servants' bedrooms in the main building. Guests slept in a cottage which had been built on.

Lady Airlie spent many hours of the day in the centuries-old ‘Stone Room'. It was no bigger than a closet, but its windows looked down on the lovely sweep of the River Melgum and in it she wrote her books. Freed from the responsibility of the vast Cortachy estate, she usually gave the whole morning to writing.

The small castle was easily run. Her household—in addition to Louisa Roffey, the maid who had been with her since her childhood—consisted of two country girls. With none of Cortachy's facilities for entertaining, she maintained its traditions of hospitality. In the months of September and October Airlie was always filled with guests. Many of them still remember the big Scottish teas with fresh-baked scones and cakes and home-made jam; the game pies and newly caught trout served with delicious sauces; the russet apples from the old walled garden.

The Queen and Princess Mary stayed several days at the castle in September 1921.

‘The Queen had said to me rather wistfully at Windsor earlier that summer how difficult it was for her to get a real holiday since she could no longer go abroad to stay with the old Grand Duchess of Mecklenburg-Strelitz as she used to do', Lady Airlie wrote. “On an impulse I exclaimed, “How much I should like to ask Your Majesty to Airlie if it would not be too small!” She answered warmly that of course it would not be too small and that she would be delighted to come. But in my eagerness to give her this rest which she so badly needed I had forgotten that her conception of small” and mine might be different. She brought with her, besides Princess Mary, the very minimum of people, but even so they comprised a gentleman in waiting and his servant, two dressers, a detective, a footman, a chauffeur and under-chauffeur. I passed over the problem of finding rooms for all of them to Louisa, and in some miraculous way she solved it successfully.

“The visit was a very great pleasure to me, and I felt that the Queen and Princess Mary enjoyed it too. No two people could have been easier to amuse. I had arranged several motor drives to places of interest, and one or two luncheon and dinner parties, but they were equally happy sitting quietly in the gardens.

"Princess Mary had a very strange experience at Airlie but I only heard about it from the Queen long afterwards.

‘On the evening of their arrival the Princess went for a walk in the gardens while her mother rested before dinner. Quite alone she wandered along the paths in the evening sunshine and through the thicket, which has always been known as "The Den”, towards the little bridge spanning the River Melgum. As she reached it she was seized with such an inexplicable and overwhelming sense of fear and horror that she turned and ran the whole way back to the house. When she went up to her room she was shaking from head to foot, but “The Thing”— whatever it was—had made such an impression on her that she could not speak of it, even to the Queen, for several days.

‘This has happened more than once in the case of new arrivals at Airlie, always at the same spot and at about the same time—between six and seven in the evening and very often the experience has been followed by some tragedy.

'In the nineteen-thirties I had a party of young people staying with me at Airlie for the Forfar Ball. They included Winston Churchill's daughter, Sarah, and my grand-daughter Clementine Mitford, Jock Colvillei and Prince George Chachavadze. They arrived early in the afternoon and after tea the girls went up to rest in their rooms while Jock Colville, at my suggestion, borrowed a fishing rod and went down to the River Melgum.

'After a while he grew tired of fishing and began to walk along the path in the evening sunshine, just as Princess Mary had done. Suddenly he was transfixed with a sense of terror which he said was “impossible to describe". It deepened until as he reached the little bridge he could fight against it no longer, and ran full speed back to the house.?

'I myself had more than one encounter with what I came to call the unseen presence of evil in The Den. I could never forget a walk which I took by the River Melgum on a lovely day in May soon after I settled at Airlie. The sun was still shining when I entered the wood in the early evening with my dog-a little Aberdeen-trotting blithely ahead. All at once he stopped dead, and I supposed that he had seen someone or something through the trees. I looked round, but not a soul was in sight, and then suddenly I felt that overwhelming, devastating fear. After that I remembered nothing but a wild scramble up the side of the steep bank, holding on to roots and trees, stumbling, falling, climbing, regardless of danger, with one impulse only, to get away from some frightful evil. When at last I reached the top I sank down on a log and called repeatedly to my dog. Nothing would make him cross the ground from which I had fled but eventually he came round to me by another way.

‘After that I always avoided the path by the River Melgum and begged my guests to do the same.' 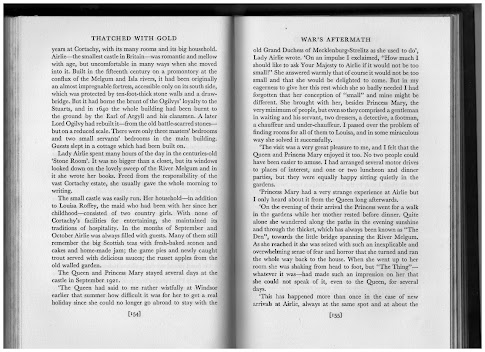 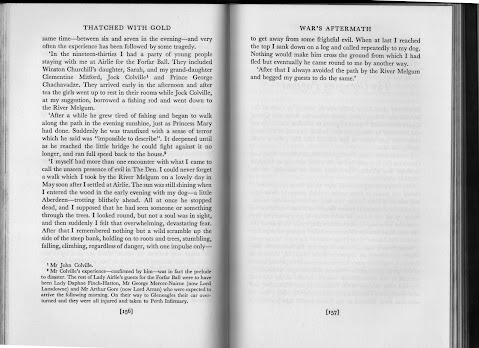