As more and more vegetation gets pulled off Balintore Castle in the process of restoration, the bits that do remain suddenly jump into hitherto unknown prominence. Gosh, I thought to myself, that fern growing directly under the kitchen window needs to be removed. I decided to remove this plant as a quick task, while my friend Andrew and I were taking turns at painting a high-up window leaning over the edge of some scaffolding. In fact, the somewhat exhausting position one had to adopt while painting, was reminiscent of  the contortion demanded whilst kissing the Blarney Stone.

Anyhow, it wasn't a quick weeding task at all! Like all jobs at the castle, the tendency is to totally underestimate their scale. I reckon this fern had been growing there for at least 50 years. After two hours of work, Andrew and I had got only half the fern removed. We had chopped it with an axe, used trowels and shovels - but the roots proved incredibly tenacious. We had first to clear away the leaves, then the earth mound the fern had created for itself through decades of self-fertilising.

In the end I bought myself a garden fork (the most appropriate tool that we did not have) and removed the final bit of root a couple of days later, after 30 minutes work. The last bit of roots I removed are shown in the photograph with the ladder for scale. This is only a third of  the entire root system, and thus the plant deserves its place in the "super-size-my-biology" seam of carboniferous fossils, along with foot-wide dragonflies!

Ferns hold water against the side of stonework, and this spalls the stone in the winter as well as washing away the mortar, so as much as I love the fractally bootylicious fern as a plant - it had to go. When I first saw the castle, vertical columns of ferns were growing up the sides of the building, in precisely the locations where the stolen downpipes should have been.  If I half-closed my eyes, the elevations of Balintore were the exotically-vegetated cliffs leading up to the plateau of Arthur Conan Doyle's "The Lost World". :-) 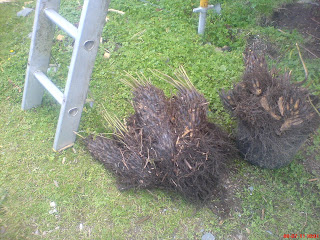