Top of the Props

It is so hard to recognise, for a possessor of much self-doubt, when one is on the winner's rostrum. But, thanks to the journalist Jack McKeown for an article in today's Dundee Courier, which declares Balintore Castle as No. 1. of his top ten homes of the year! 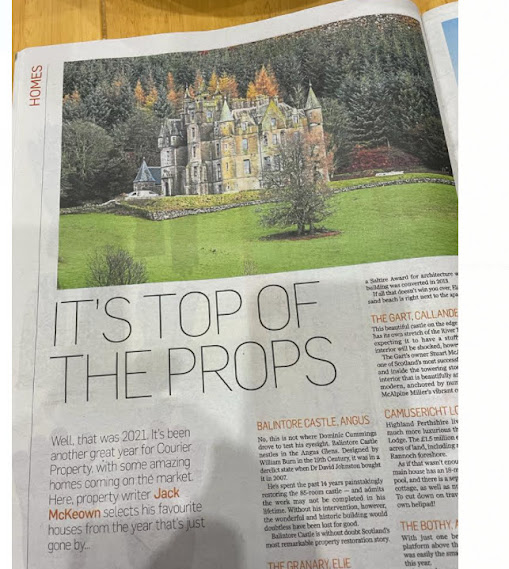 Well that was 2021. It’s been another great year for Courier Property, with some amazing homes coming on the market. Property writer Jack McKeown’s does his own ‘Top of the Props’ ranking his favourite houses from the year that’s just gone by.

Occupying the entire top floor of a former mill building at Elie Harbour, 6 The Granary is a £950,000 penthouse apartment with the wow factor. Vaulted ceilings, exposed stone walls and sweeping coastal views from every direction make it an amazing space. No wonder it won a Saltire Award for architecture when the building was converted in 2013. Elie’s golden sand beach is right beside it.

Original article: Penthouse apartment in historic Elie harbour building has stunning interior and views all round

This extraordinary house was built on a tricky site in St Andrews. With neighbours all around, architect Gareth Hoskins was given the challenge of designing a home that didn’t overlook the properties next door. The result is the Garden House, which looks inward over its own Japanese-style courtyard, complete with decking and pond. Little wonder it was one of the finalists in the BBC show Scotland’s Home of the Year.

Original article: Amazing St Andrews house in the running to be crowned BBC Scotland’s Home of the Year

Its sellers billed Glenacres ‘Dunblane’s finest home’ and it’s hard to argue with that. The beautiful B-listed house was on the market for £1.6 million. It sits in 1.8 acres of gardens on one of Dunblane’s most exclusive streets. Its owners took down an old conservatory and replaced it with a stone, glass and slate sunroom designed to complement the house’s Victorian architecture.

It even has its own folly, thought to be made out of leftover stone from Dunblane Cathedral, which was a thank-you to the original owners for contributing to the cathedral’s restoration costs.

The most expensive property we featured this year, Careston Castle was on the market for a cool £11.3 million. That bought you the historic castle itself, three estate cottages, a farmhouse, two farm cottages, an array of agricultural buildings and around 1,500 acres of land. When you look at it that way it’s almost a bargain.

Highland Perthshire living doesn’t come much more luxurious than at Camusericht Lodge. The £1.5 million estate has 66 acres of land including almost a mile of Loch Rannoch foreshore.

As if that wasn’t enough the nine-bedroom main house has an 18 metre indoor swimming pool. There is a separate coach house and cottage, as well as numerous outbuildings. To cut down on travel time it even has its own helipad.

Deep in the heart of the Angus Glens, Knockshannoch Lodge may be the most amazing house on this list when it comes to design. It consists of two roundhouses, which look separate but are attached by a hidden corridor. Originally a sporting lodge and latterly used as an outdoor centre, the house has enormous potential.

In particular a new owner could restore the central round room, with its extraordinary vaulted ceiling stretching 50 feet to a cupula at the apex of the building. It’s a lot of house for £535,000. The best thing is its wonderfully gothic design, complemented by its setting in the woods. We think it looks like something straight out of the Harry Potter films.

Nestled in trees, Fenton House feels like it’s in the countryside. In reality it’s on the edge of Ninewells Hospital in Dundee. The super insulated three-bedroom house was designed by architect Kirsty Maguire to Passivhaus standard. This means it costs almost nothing to heat, with sunlight generating enough warmth to keep the house cosy. The design, essentially a row of gable ends, has a Scandi feel to it. Inside, huge windows make it a light filled home and vaulted ceilings create a sense of space.

This beautiful castle on the edge of Callander has its own stretch of the River Teith. Anyone expecting the Gart to have a stuffy traditional interior will be shocked, however. Its owner Stuart McAlpine Miller is one of Scotland’s most successful living artists. Inside its towering stone walls lies an interior that is beautifully and unashamedly modern, featuring numerous pieces of McAlpine Miller’s vibrant contemporary artwork.

Original article: Incredible Callander castle sits on riverfront and has amazing interior by one of Scotland’s top artists

With just one bedroom and a sleeping platform above the living room, the Bothy was easily the smallest property we featured this year. It was also one of the most lovely. Priced at offers over £285,000, the tiny house sits in the Perthshire hills a few miles from Aberfeldy and enjoys beautiful views to the River Lyon. The living room has exposed beams, a feature stone wall and a wood burner. Meanwhile, the new dining room extension has floor-to-ceiling sliding glazed doors to enjoy the view from.

No, this is not where Dominic Cummings drove to test his eyesight. Balintore Castle nestles in the Angus Glens. Designed by William Burn in the 19th Century, it was in a derelict state when Dr David Johnston bought it in 2007 for £80,000.

He’s spent the past 14 years painstakingly restoring the 85-room castle – and admits the work may not be completed in his lifetime. Dr Johnston pours almost every penny he earns into the castle. Thanks to him, it’s wind and watertight and whole sections of the castle have been returned to their former glory.

Without his intervention the wonderful and historic building would certainly have been lost for good. Balintore Castle is without doubt Scotland’s most remarkable property restoration story.

Original article: The Angus castle at the heart of Scotland’s most amazing restoration story