The best advice I have read for "how to cope in a pandemic" is to plan a timetable of activities to re-inject structure into one's doldrums-esque existence. Naturally, I have failed miserably in this and have even failed in executing the government's stipulated daily perambulation.

In consequence when the need presses, I have been boosting my mood by a long directed walk. Ticking both the boxes (i.e. combining a plan and a walk in a planned walk) seems to be occurring about once a week, and my mind generally has a couple of walks I would like to do pending.

Every 7th row of trees in the forest facing the castle was felled and harvested during the autumn and winter of last year. I am not sure the reasoning behind this strategy. Generally thinning allows remaining plants to grow bigger, but these trees are already massive and only the outermost 2 of the remaining 6 rows will benefit. No doubt someone can educate me.

Anyhow, the plan was to walk up one of these newly formed avenues in the forest, and bask in the majesty of the arboreal cathedral. As for the destination: this was obvious. The forest was on the side of Macritch Hill so I would climb to the top. Macritch Hill merges into Creigh Hill, so I might as well do the double summit, very much in the same way Munroe Baggers bag clusters of summits on a single outing. The map showing both hills and the location of Balintore castle (red marker) is below:

I had only climbed these hills once before with my friend Damian 10 years ago, so revisiting was long overdue. These hills very much define the immediate landscape round the castle, so I think of them as friends. Here is the eventual walk I undertook shown on Google Maps:

I started out on the walk at 10 AM last Sunday. It was, as I had hoped, another beautiful sunny Spring day,  En route to the forest, I spotted some primroses on the banks of the Dairy Burn. I love primroses not just because they are a beautiful and simple first flower of spring, but because of a family connection. When my Mum was first married, money was tight and even a packet of biscuits had to saved-up for. I have never thought about the reason for this before, but it was probably because my Mum had just given up her job. In those less enlightened times, married couples were not allowed to work together in the same branch of the Met Office. She picked primroses in the local woods, potted them up, and sold them door-to-door. She never did tell my father. :-)  I am in awe of the fact she just got on with it

The gorse was also in flower. The first flowers of the year are yellow, then this changes into the purple season when all the flowers are purple. It does seem to be the case that Mother Nature goes through the colours in the course of the flowering season, but I have never found this referred to in any text book or web resource, let alone explained. Let's call it the Johnston theory of temporal flower colour cohesion. There was a bunny sunning itself on its hind legs in the middle of the gorse, but I was too slow on the shutter!

Counting the rings on the felled trees showed 25 very clear large rings. At the centre it was hard to decide if the sapling had some prior seasons of much lower growth, so I would put the age of the forest between 25 and 30 years.

Inside the forest were some muddy tracks. In fact one turned out to be like quicksand, and I had to retreat as my shoes sunk in deeper and deeper. There were some very large bird footprints in the vicinity, what type of bird is it?


At the top of the forest by the deer fence was a corvid in a cage. This is a Larsen Trap and it is a way of trapping other birds of the same species, to protect young pheasants or grouse. 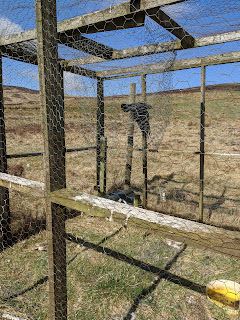 The fauna and flora as I climbed steadily higher above the forest became fantastical: lichen with red flashes; large green iridescence beetles; bright red butterflies dancing in pairs and even a little lizard. Despite it being a Common Lizard, it is only the second time I have ever seen one at Balintore.


If truth be told, I did lie in the sun a few times during my ascent of Macritch Hill. This is not just because I am unfit, but it was simply glorious getting warmth from the sun after what has felt like a long winter. The view looking back at the hamlet of Balintore puts everything into perspective, my neighbours are all huddled together in matchbox houses. Even the castle is a matchbox house.

This panorama is taken from the cairn on Macritch Hill:


This panorama is taken from the slightly taller of the two cairns on Creigh Hill.  In fact, I suspect the lower cairn is a shooting butt. Creigh Hill is slightly higher than Macritch, and from the summit you can look down on the Backwater Reservoir over in the next glen. The other body of water you can see is Lintrathen Loch.


On the way back to the castle, taking a route I had never taken before, I fell up to my waist into a stream. I had assessed it just to be boggy ground, and decided that running across was the best way not to get wet. This was a spectacular miscalculation. My fawn coloured jogging bottoms were brown with mud and sagging with the weight of the absorbed water. Naturally, just 5 minutes later, I passed the first two people (dog walkers) I had seen all day. To preempt a "What happened to you?!" I got in first with a "Good Afternoon". I wonder what tale they are telling about the "Creature from the Black Lagoon of Balintore"? :-)