Hand-Tinted Postcards, Subtle and Not So

My thanks go to Colin McLeod of Dundee for providing this scan of his rare hand-tinted postcard of Balintore Castle. Colin spoke to me during the recent open day, and indicated this gem was in his collection of 40,000! And yes, I have got the correct number of zeros in this figure. :-)

I may as well quote Colin's expertise verbatim:

The card was published in the D&SK ‘Ideal Series’ [Davidson & Son, of Kirkcaldy]. It is not dated or used, but it is a ‘divided back’ postcard, so cannot have been printed before 1902, and as the publisher had the card printed in Saxony, it cannot be later than 1914.

With the hand-tinting and odd, rather unrealistic two-tone palette for the stone of the building, this is very different proposition to the other (black and white) postcards I know, which are shown in a previous blog entry.

The unforeseen and delightful consequences of having an open day!

On seeing this blog entry, friend of Balintore and fashionista Écossaise extraordinaire, Solveig sent me this image of a second postcard.

A minute of so of study shows it is the self-same photograph but cropped differently and given a much more subtle crepuscular hand-tinting. Much more to my taste. The plants are in the same position and at the same stage of growth, and from the agreement of object alignments in the two images, the position from which the two photographs were taken is identical.

For completeness the reverse of the second postcard is show below. The postmark of the 2nd August 1909 supports Colin's earlier dating.

And for further completeness, courtesy of StreetView, here is the charming property to which the postcard was addressed: 48 Rothwaite Road, Liverpool.

And an update (19th November 2019). The same image found on a postcard for sale on eBay, but this time in the original black and white. 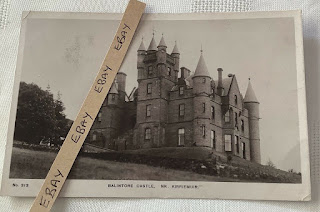 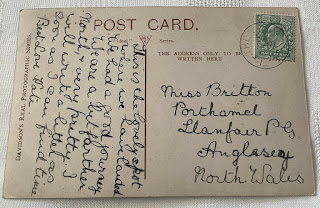