Castles Home and Away: Part Six

The main target of this year's mini road trip was Castle Stalker. It is only open on a few days of the year and had to be booked in advance. The secondary target was Mingary Castle. I had never expected to visit Mingary as it is so remote. However, it is only a little bit further into the wilderness than Castle Stalker, so it made total sense to visit it on the same trip.

Mingary Castle is currently undergoing an impressive restoration which is the main reason I wanted to visit. There are warnings on the excellent blog that there is no access to the public, so I wrote a number of times to the author of the blog to ask how I would set about getting permission. There was no reply, so the fairly long drive to Mingary could well have turned out to be a wild goose chase. My friend Andrew did the driving, and I don't know how many times I apologised to him in advance about the possible failure of the mission.

Things did not bode well as the road to the castle was labelled with a sign "no vehicles and no access to castle". Some lateral thinking was required. I suggested that as the castle was on the coast, all we needed to do was somehow get to the coast and follow it round. We passed the castle and drove into the tiny village of Kilchoan. This had a small tourist office/community centre. I asked about access to the castle at the tourist office, I was told categorically there was none. The community centre had leaflets on the castle, and a perspex collection box raising funds for the restoration. The contents of the box were not inconsiderable, perhaps I should take a hint from this? :-)

Andrew and I left the car in the community centre car park. We walked to the harbour, where a ferry was disembarking. I strode off along the beach to the left, the direction we had come from. Surely at some stage I must encounter a castle? Andrew lagged behind, and seemed far less keen to jump over rock pools and climb along cliffs, where there was no beach or where vegetation made going along the flat impossible. I asked Andrew if he was OK but he is very stoic; said nothing; and kept going at his own pace. I found out afterwards his shoes did not have a proper grip. We were scrambling over wet rock surfaces.  Mind you, my trainers seemed no better than his! :-)

After an absolute age we finally chanced on the castle. I had considered inwardly giving up a number of times. The castle is absolutely wreathed in scaffolding. In the flesh this is quite astounding, and I had never quite got the scale of the engineering undertaking from the photos on the blog.

I had wanted to talk to someone at the castle about the work going on, but this would involve revealing ourselves as trespassers. I figured we should have a look around first before we got caught. There were at least 10 workmen, and on the principle of "diffusion of responsibility" I figured they would do nothing when (inevitably) we would be spotted. Often people at the coal face are far less "precious" about permission or lack of it, as that is a bureaucratic creation. Andrew and I had a good scramble around. The rock the castle is situated on is the very definition of vertiginous. Half of the beach below the castle is a massive single slab of hard rock: more or less flat but on a considerable incline. An amazing natural phenomenon. This is ideal for boat access to the castle, but to walk across it was absolutely treacherous:  the surface was covered in generic wet beach slime and seaweed! We tried to find safe paths across it where there was a little washed-up sand. 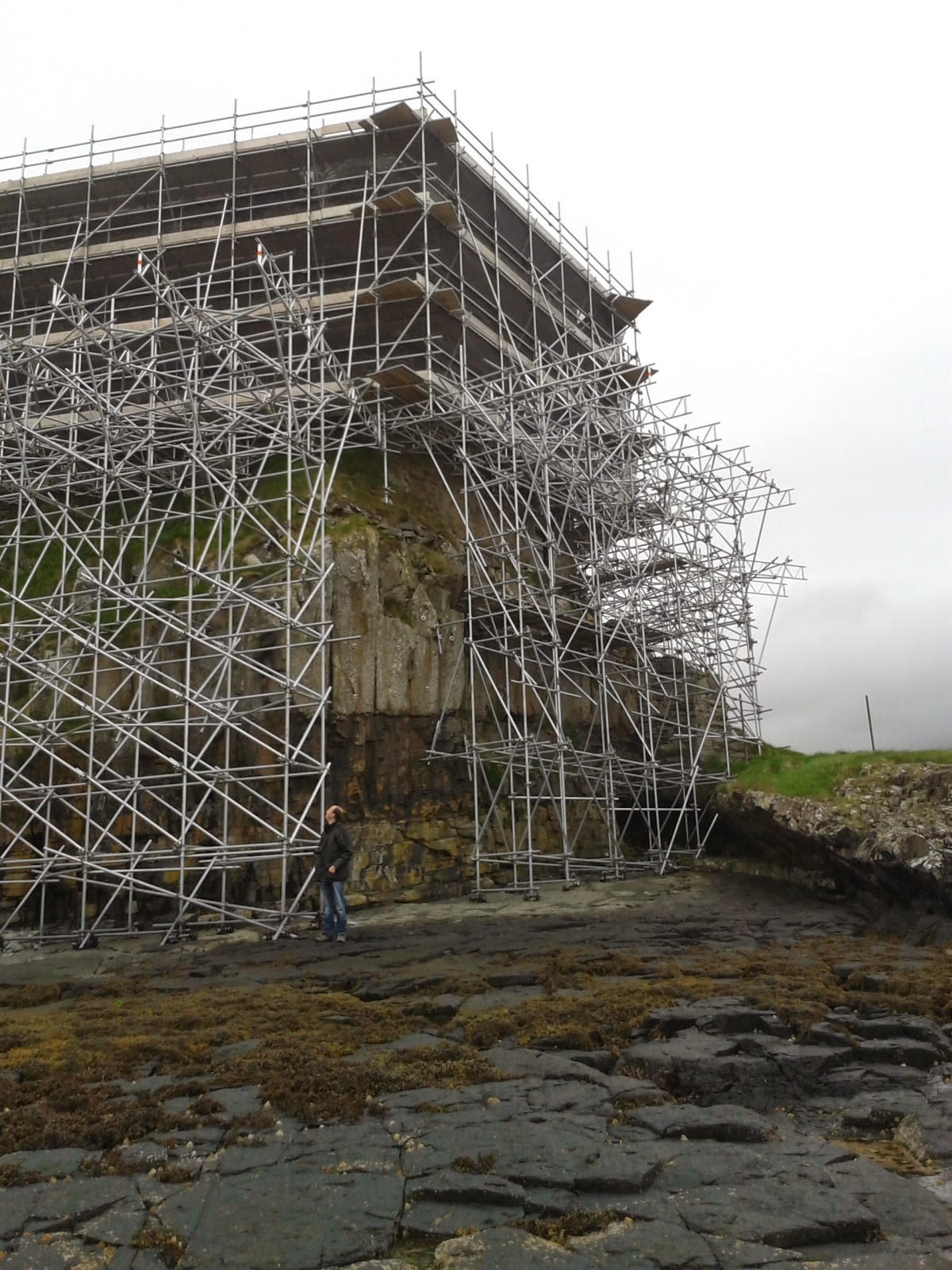 Andrew standing by scaffolding for scale


We then boldly climbed up to the work yard. There was a fence around it but we skirted round this to the main entrance and made our way to the site foreman's portakabin. There we met Mr. Thompson of the restoration contractor Ashley Thompson Ltd. He was extraordinarily generous is giving Andrew and myself his time, and telling us about the restoration. One of the major problems is remoteness. The workmen have to live on site in caravans and are away from their family and friends for months at a time with NO personal internet access! Mr. Thompson indicated there was just one place on the building site with some Internet access. The Ardnamurchan Estate who are behind the restoration supply the oak from their forests for the timber construction, and will eventually supply the firewood for the newly built detached boiler house which will heat the castle. Oh to be able to supply my own wood at Balintore! :-) This generates 90% of the material sourcing issues.


Ashley Thompson Ltd were behind the most well known "Grand Designs" restoration projection, which was the peel tower/castle in Yorkshire. Most people I speak to have this down as their favourite. It's mine too! Mr. Thompson talked about being 6 months behind schedule at Mingarry due to the weather: the site is incredibly exposed and there are many times where any work is impossible. I mentioned that Balintore Castle was an unspecified number of years behind schedule: the important thing being just to carry on. :-)

I asked Mr. Thompson who writes the Mingary blog, as it is incredibly well-written and updated as regular as clockwork once a week,  Mr. Thompson revealed it is written by an author and journalist who lives nearby. I can only hope, given the erratic scheduling and erratic English of my blog, that the author gets paid so I can excuse my shortcomings as those of an amateur!

All in all, I think Mingary is my favourite restoration project. It is a shame that Andrew and I could not wangle internal access, but it is a busy building site so you could tell there was no way just by looking at the situation. I recall pathetically asking if I could help with the pointing as a way of getting on-site. This is an ongoing and mind-numbingly time-consuming task.


It is incredibly rare for permission to be given to restore such an old and historically significant structure. I only wish it happened more often. The work being done at the castle has saved the building - the vast rock underneath was splitting and had to be pinned: a major engineering challenge in itself. I cannot imagine how much money has been spent - if only Balintore had the same budget. The work being done at present is of the highest quality, with many workmen on site full-time pushing the building forward. Since Andrew and I visited a roof has been put on the castle: a magnificent building is now emerging from the magnificent ruins.