I was trying to do some research on the Scottish Land Registry website yesterday. The required information is computerised nowadays but frustratingly is not directly accessible on the Web so you have to pay someone to look it up. This seems wrong somehow, against the principle of transparency of ownership, and if you want to do a lot of searching then this could cost you a pretty penny. So much for the freedom of information! Hopefully, in a civilised society like Scotland, it is just a matter of time before this is rectified.

Today I came across the registry information for Balintore Castle during some lock down tidying in my little office. I had not lost the information, as such, but let's just say it was in safe storage. :-) Given my little rant above, it was now the time to digitise the information so it would always be at my fingertips, and indeed would never have to be paid for ever again

Other ownership information had recently been provided by a friend of Balintore, so it was also time to cross-reference this to create a definitive timeline of more recent ownership, which I have appended at the end of this entry along with scans of the registry documents.

The long term mid 20th Century ownership of the castle by the Kinnordy Estate marks the division between the early owners and the later owners. Lady Langman who is frequently mentioned in this blog had use of Balintore Castle for the duration of her lifetime, so this was ownership in a practical sense, but not a titular one. I would love to find out more about the nature of this arrangement.

When the Kinnordy Estate sold the castle in 1986, it was separated from its land, and from this date onwards the building really hit bad times, moving rather swiftly between developers.

In 1989 Country Life identified the owner as a Mr. F. Godley stating that he bought it from the Lord Lyell, whereas the register indicates this is a Duncan Gordon. The names are different enough to exclude a simple error, so I am wondering if Mr. Gordon was merely the broker or agency for the sale or if he simply passed the property to Mr. Godley without any formal sale? When the property is next sold it is by Mr. Gordon.

The purchase in 1991 by SMEX LIMITED was a bit of a mystery. Who was this? Googling returned no useful results - there are many, many companies with this name.  However, in 1992, a newspaper article identified a Mr. R. Kelbie as the owner. Googling for "Kelbie" and "SMEX" identified he was the director of the now defunct company - bingo!

Mr. Kelbie was apparently desperate to get rid of the building immediately after purchase as he took it on in error, and this explains the recently discovered  "for sale" notice of 1992. However, it actually took him a full 3 years to sell on the building to a Mr. Liu in 1994.

Mr. Liu then sold  the building to his company for a staggering £685k, and then back to himself for £60k. This latter figure is not in the register, but I believe this to be the correct amount through discussions with Angus Council.

Finally, after 13 years of Mr. Liu's effective ownership it was transferred to Angus Council via a compulsory purchase for £80k at around 11AM in the morning if memory serves. A few hours later, it was transferred to me. I did not and could not believe this had actually happened. The compulsory purchase had taken 8 years by that stage, so my brain has simple assumed that the legal work was interminable, as with the fictional "Jarndyce v Jarndyce" case of Dickens's "Bleak House", which had run for generations.

So in summary, with the exception of the mysterious and possibly entirely spurious Mr. Godley, the later ownership timeline of Balintore Castle has been nailed! :-) 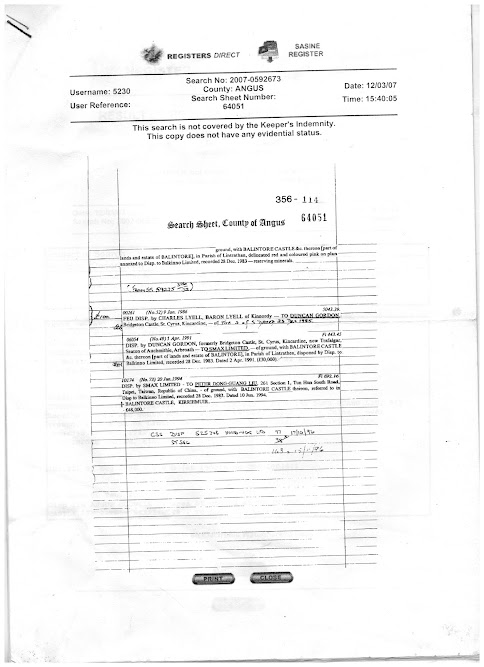 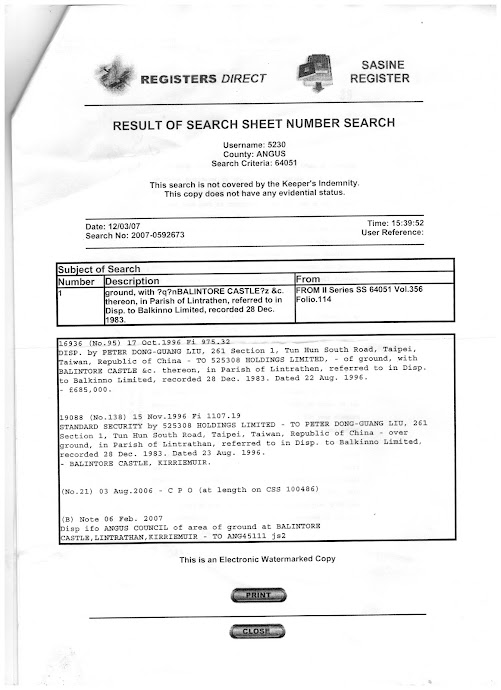