After one hundred years, the nails holding the slates on a roof will generally be at the point of giving up. The iron will have rusted, and the slates will start to slip off. The roof is described as being "nail sick".

This is not the case at Balintore Castle. No expense was spared on the construction of the building, and the slates were put on with hand-cut copper nails. There are still in A1 condition after 150 years..

My trusty roofer sent me off some days ago to buy him a box of new copper roofing nails. This was £200 - cough! Costs restoring a Grade A listed building can be somewhat alarming. I always think what a nice bit of technology I could get for £200! Anyhow, while tidying the castle I passed the box of precious nails and thought I had better run my fingers through them to try and get some pleasure for my money. Inside the box, were a number of the old nails, Andy the roofer, has clearly been recycling these wherever possible which is great.

Here for comparison is an old and a new nail: 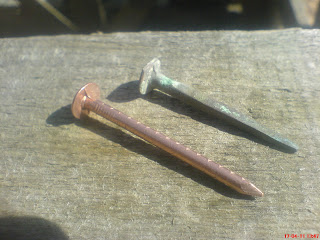 Copper nails, I have learned off the web, are also used in boat building as they do not rust.
You can tell from the picture, the glorious sunshine that lasted all day at the castle.

I got so fed up working inside the castle (it is cold), that I took my tea breaks in the warm sun on the castle terrace. Three lovely walkers came up and talked to me. They had been following the fortunes of the building walking past it at least once a year, long before I was on the scene. They were delighted someone was doing something - they said it had been depressing beforehand and they now
think the building looks a lot better. :-)

I also had two regular castle visitors - they brought me a huge sack of tatties as usual as they have a tattie farm!. This is great as I have none in stock - people can be very kind.

I was also visited by one of my yoga teachers called Finlay and his partner. Finlay thought I was still in London, and had just come to see the exterior of the castle, so it was a really unexpected pleasure for both of us to meet up again. They were pleased to see the inside of the building for the first time..  Finlay was shivering in his vest in the cold basement areas of the castle, so I had to lend him a coat.

What with the success of plumbing in a washing machine yesterday, I kept this going all day and washed the entirety of my clothes at the castle, which had gone mouldy from damp in the year I was away. I spent today tidying, so building supplies and tools can be efficiently accessed and stored - very dull but anything I can do to save my roofer's time is to my financial benefit.

I hunted for "quarter round" guttering on the web - it has to be concluded that this is a very rare beast indeed - and getting hold of it in cast iron looks well nigh impossible. Interestingly, it seems to be most common in Australia and New Zealand. But I shall not be writing a Ph.D. on "International Trends in Gutter Profiles". Needless-to-say, the antipodeans are clearly enlightened in the guttering department even if not well stocked in the cultural one. :-)

There is, however, another profile called "Victorian Ogee" which does not possess the flat bottom of standard "Ogee" guttering, and so is close to the profile required. I gave up at this stage, as I was spent with hunting for quarter round, and will tackle Victorian Ogee another day.
Posted by David at 15:48